…via the swiftly intensifying chemical geoengineering operations being conducted across the USA. 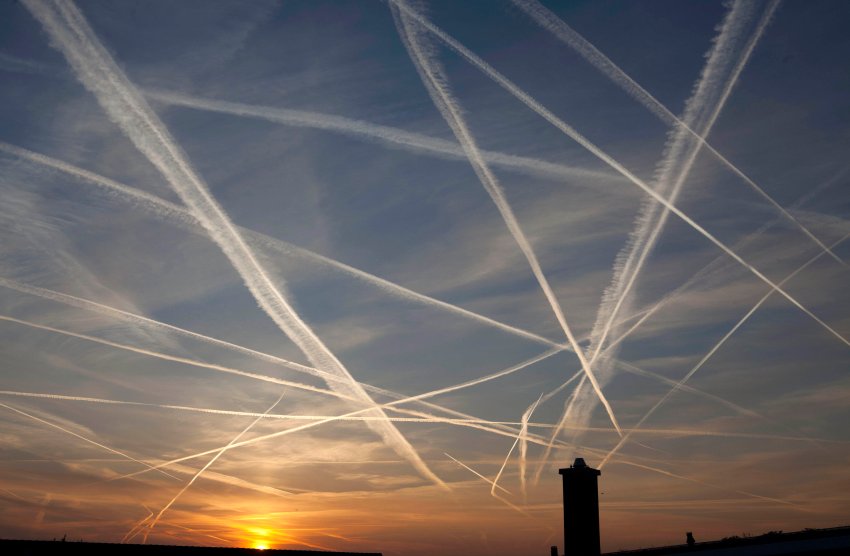 The following video presents irrefutable proof that immense volumes of graphene oxide are being dumped into the global environment.  The only way that so much graphene is showing up on beaches all over the world is by means of chemical geoengineering.

In point of fact, the chemtrail spraying across America has seen a dramatic uptick since the very day POTUS Imposter Joe Biden took office.  Therefore, it’s clear that the New World Order globalist cabal is determined to overwhelm the environment with graphene oxide…in order to expeditiously get the extremely dangerous poison incorporated into the human body.

Graphene has proven to be the key chemical compound by which The Powers That Be are implementing their agenda of Transhumanism.  This is also why graphene oxide has been found in the various Covid vaccines.  The end goal is to connect every human being on the planet to the rapidly expanding constellation of 5G satellites surrounding Earth.

Be sure to watch the entire video below in order to understand the relevance of this global BLACK Operation to the Covid Super Vaccination Agenda.

What the entire planetary civilization has been experiencing is the slow-motion fabrication of the long-planned Global Control Matrix (GCM).  However, it is now the physical transformation of the human race into homo graphenis that represents the capstone of this nefarious NWO project to exert complete command and control over humanity via a One World Government.

The technological superstructure of the GCM has been stealthily put into place since the advent of the Information Age.  Each successive generation of computers, tablets and smartphones have been specifically engineered to fulfill a carefully hidden agenda   The buildout of the IT infrastructure worldwide is the integral piece of the emerging tyrannical technocracy witnessed by every digitally-connected individual today.

The final piece of the GCM puzzle is to so transform the human body via graphene and/or graphene oxide, depending on the application, that every person will be forever and irreversibly connected to the Global Control Matrix.

Chemtrail Pilot Blows the Cover Off of OPERATION INDIGO SKYFOLD

For example, rarely do you see a dark black chemtrail containing graphene oxide laid down in the middle of the day, although charcoal streaks in the sky can be seen sporadically, especially in unpopulated areas or where the Air Force is carrying out a special test.  As follows: 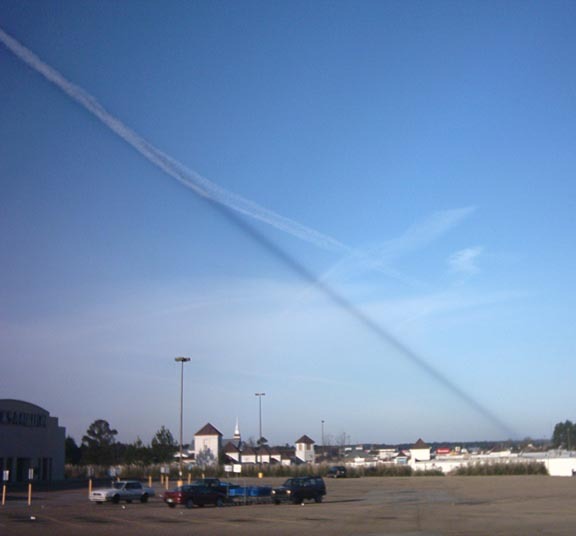 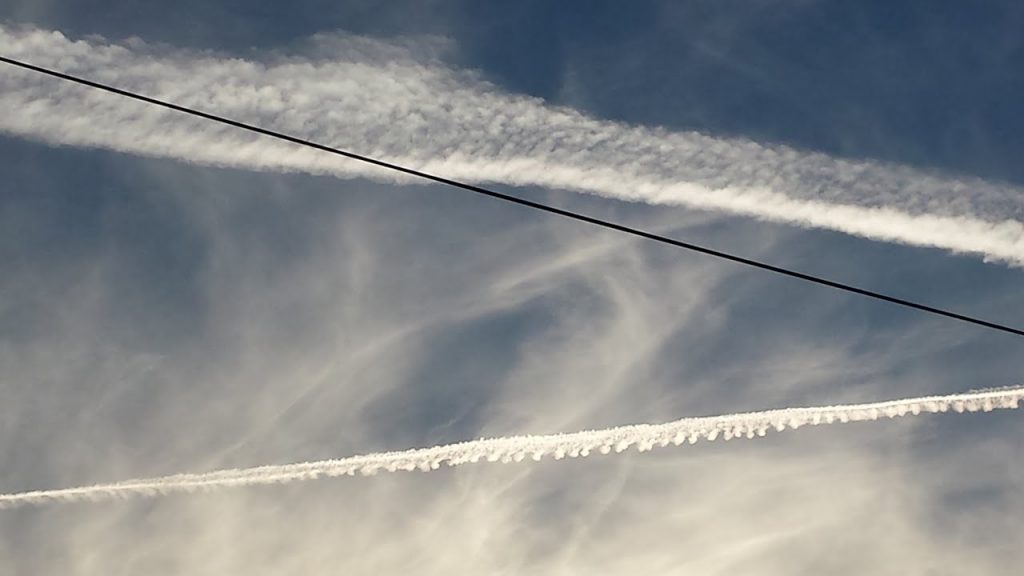 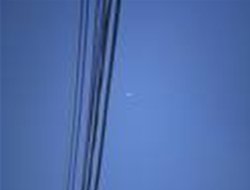 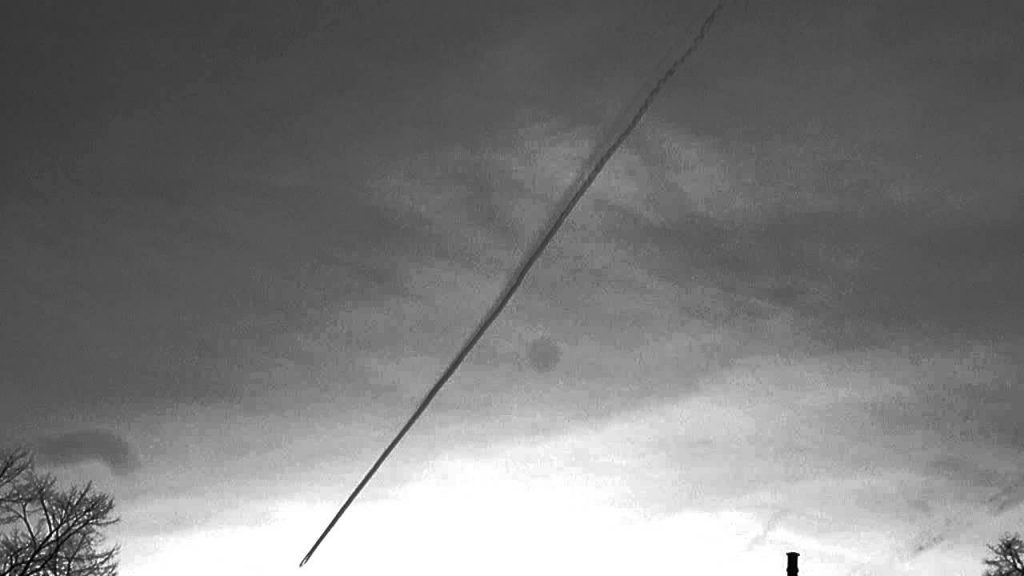 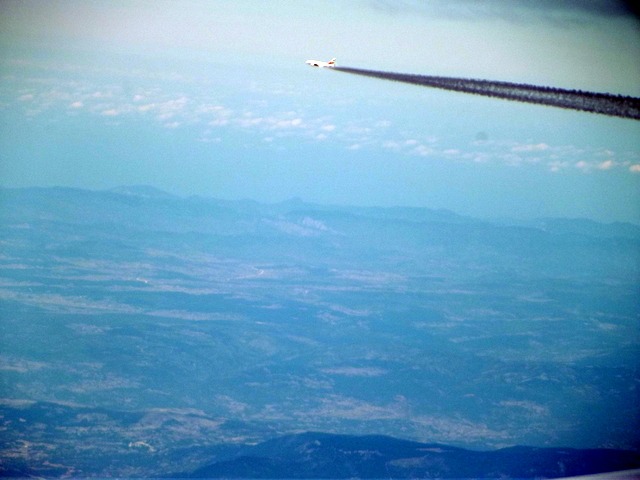 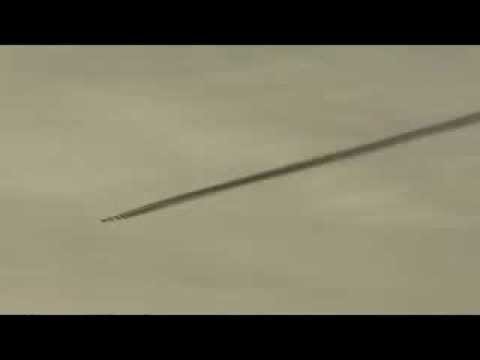 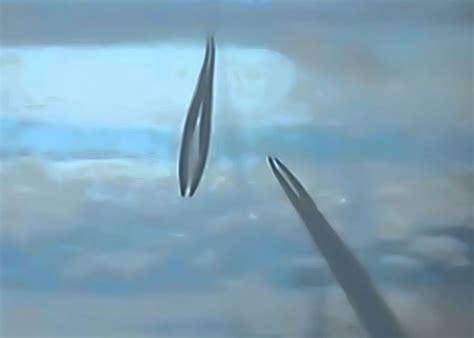 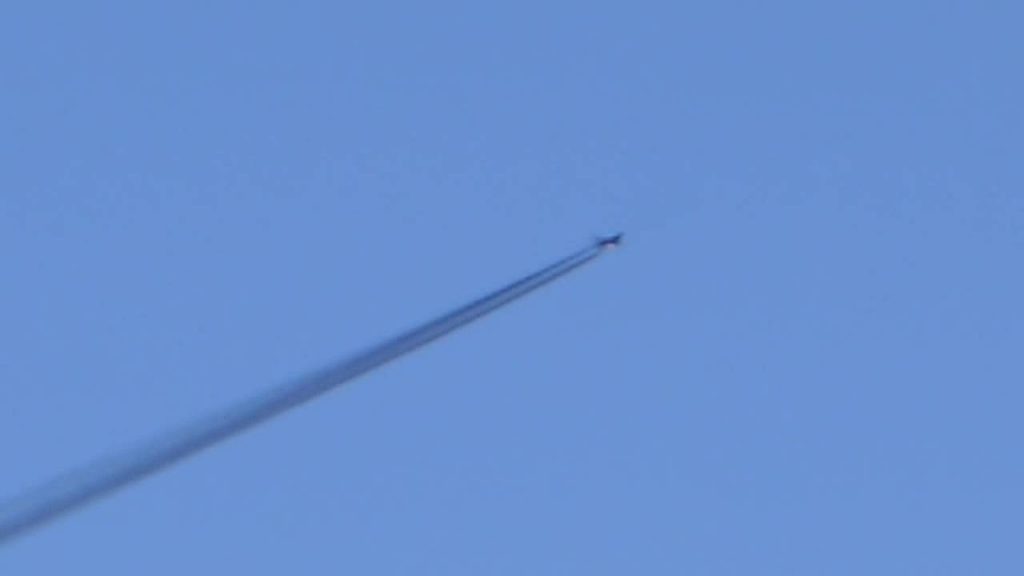 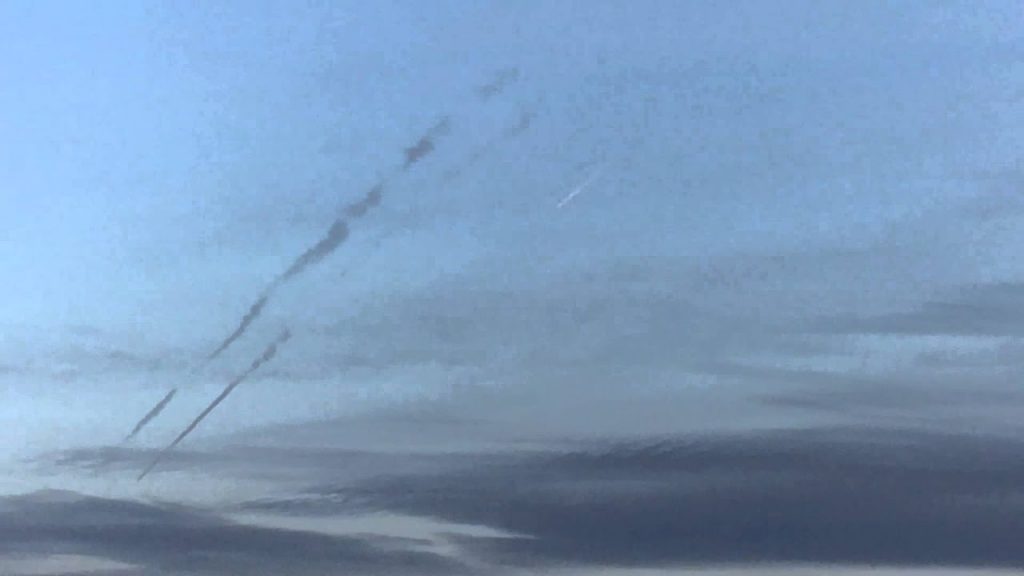 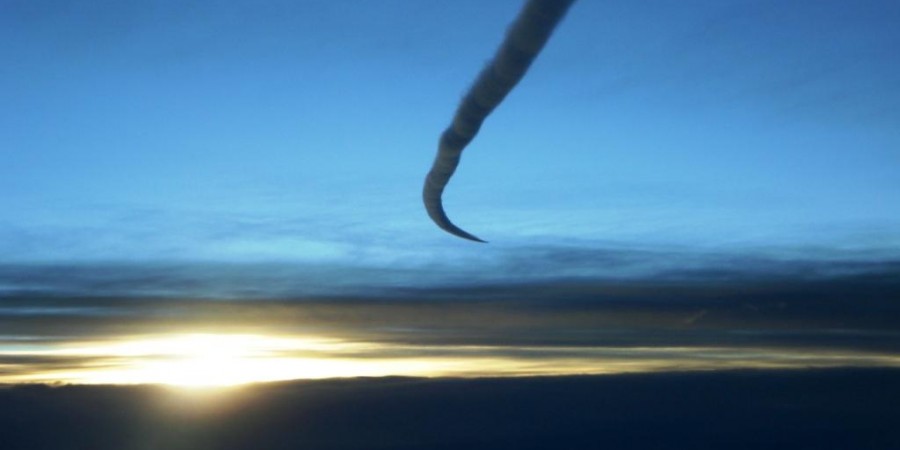 In point of fact, most of these black chemtrails are sprayed across America in the dark of night.  The chemical geoengineers are even very careful about clarity of the sky, the intensity of the moonlight, the degree of haziness, etc. when scheduling these highly polluting and poisonous chemtrail operations.

The type and thickness of the cloud cover on any given night will provide the necessary “cover” for the chemtrail jets to spray the skies all night long, which they often do above the clouds.  Frequently, the skies will be transformed into a chemtrail tic-tac-toe board right at dusk, which then creates a massive chemcloud cover for them to spray above without detection. (See photos below.) 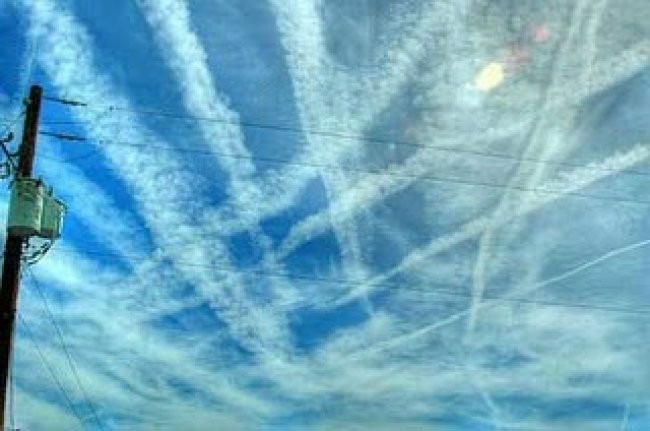 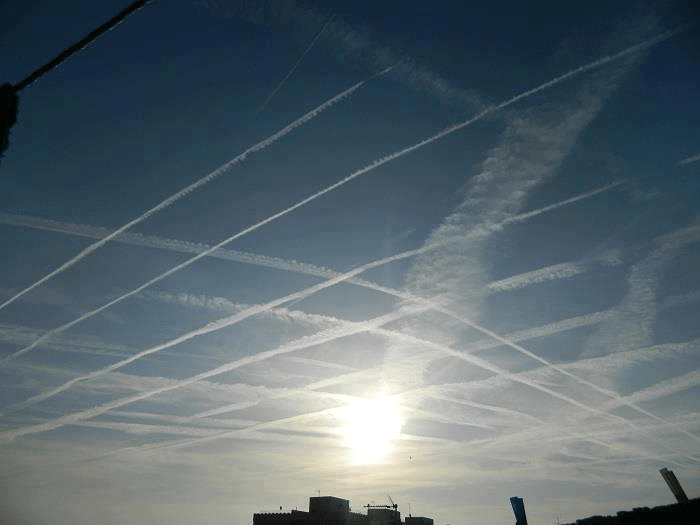 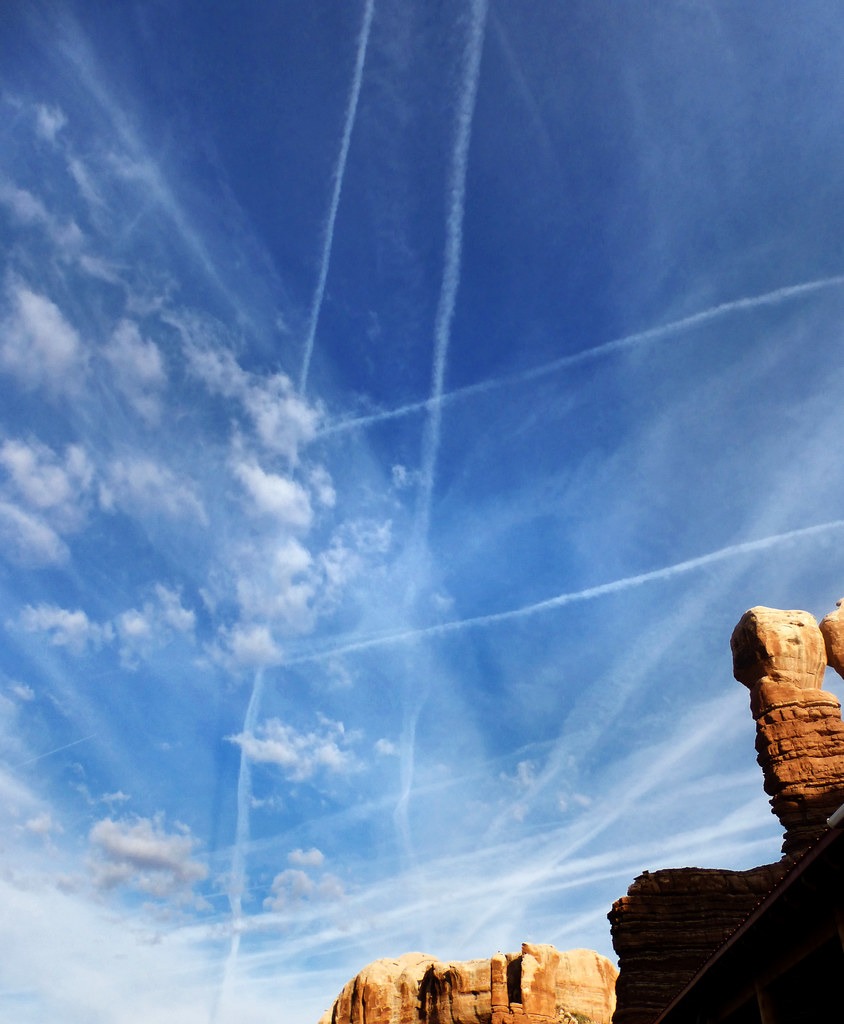 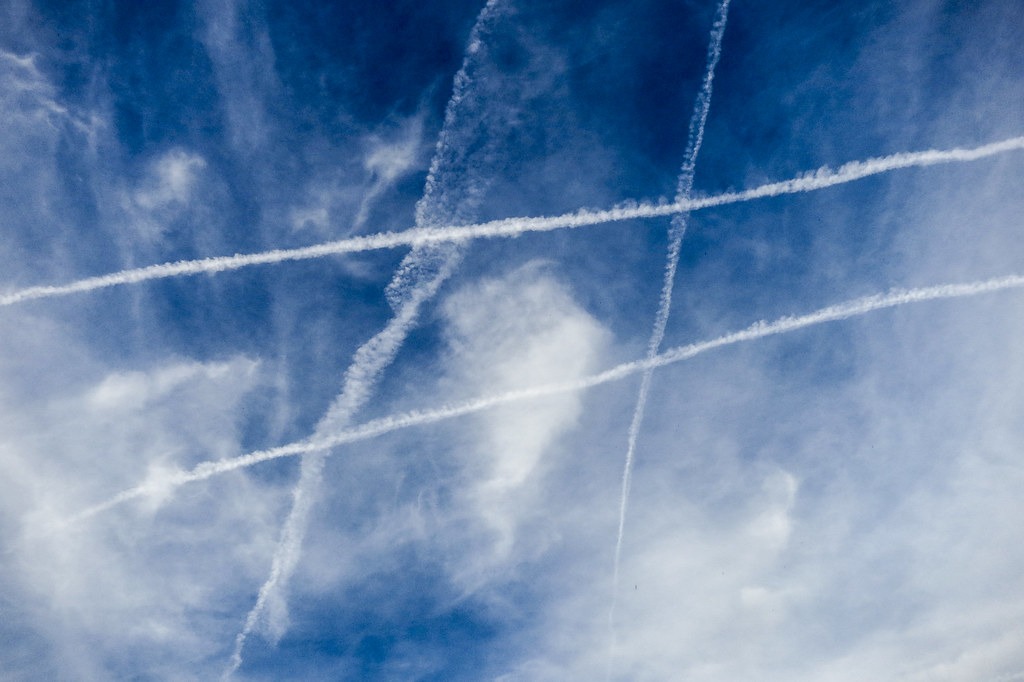 For the uninitiated, there is no question that the very common white chemtrails contain aluminum oxide—an extremely toxic but hygroscopic chemical compound that comes from the coal fly ash (mostly comprised of alumina) which is a primary waste product emitted by coal-fired power plants.

Although the smokestacks across the USA are fitted with special equipment to remove this EPA-designated pollutant, the chemical geoengineers are unlawfully permitted to dump enormous volumes of alumina into the atmosphere every day via chemtrail spraying.

There is every likelihood that black graphene oxide is also baked into the chemtrail aerosol mix that’s sprayed during the daytime, though it’s stealthily covered up with the white-colored aluminum oxide and barium salts.

Delivering biological weapons containing infectious pathogenic microorganisms, releasing toxic and/or poisonous chemical weapons as well as disseminating chemical compounds such a graphene and aluminum oxide via atmospheric spraying has been carried out by the U.S. Military for several decades. See: Operation Cloverleaf: The Most Dangerous Weapons Testing Program In World History

However, what humanity is now witnessing is the wholesale transformation of Earth’s atmosphere into an air soup of exceedingly harmful chemicals and biologicals that are being breathed to varying degrees by every resident of the planet.

Graphene, in particular, has proven to be extremely dangerous to human health as the clotshots have shown us.  When everyone is constantly breathing nanosized particles of graphene or graphene oxide, the worldwide health predicament will only get worse—MUCH WORSE, and very quickly.

Which means there is only ONE response to the rapidly intensifying global health catastrophe: