HURRICANE SALLY WAS REALLY
A SURPRISE ATTACK ON FLORIDA Geoengineers aimed Cat. 2 Hurricane Sally
at Pensacola just like Cat. 3 Hurricane Ivan
was during 2004 election cycle, and on the
very same date—September 16.  Ivan was
the second most destructive superstorm to
hit North Florida in recorded history.
Similarly, Sally has caused catastrophic
flooding throughout the western Panhandle
that will worsen as the swollen rivers crest.

On October 10th of 2018, the New World Order globalist cabal directed their geoengineer weather warriors to slam a Category 5 hurricane-tornado into the Florida panhandle less than a month before the midterm elections.  Clearly, their intention was to swing the outcome of the highly consequential elections occurring throughout the Sunshine State, especially the governor race.  The following exposé breaks down that conspiratorial plot in great detail.

The explicit intention of the globalists in 2018 was to incapacitate as many Republican voters as possible in an effort to see Tallahassee Mayor and Democrat Andrew Gillum elected governor.  In this way, Deep State planned to use Gillum to fix the outcome of the 2020 POTUS election on November 3rd in Tallahassee.  After all, every political pundit knows that whoever wins Florida’s 29 electoral votes always wins POTUS.

Political insiders knew that, with a Democrat governor installed in Florida Governor’s Mansion, it would be much easier to steal the upcoming most important election in U.S. history.  Not only was Soros-funded Candidate Gillum overwhelmingly unfit for high office, he was eventually shown to be highly compromised and willing to do whatever his globalist masters ordered. See: This is exactly how they control and coerce politicians like former FL Democrat governor candidate Andrew Gillum.

The only reason why the 2020 hurricane season has been repeatedly predicted to be the worst ever is because the globalist-directed geoengineers are working overtime to fabricate these Frankenstorms.  In other words, the electorate is being relentlessly gaslighted in advance of the transparent weather warfare in order that everyone will simply accept that these are natural disasters.  They are natural.  Yes, some of them may be, but then they are purposely amped up into megastorms.

While any one of the 3 aforementioned superstorms may have started out as acts of Mother Nature, the geoengineers are notorious for hijacking them, then increasing their size and intensifying their power, and then aiming these devastating weather weapons into a targeted city of state.

For the uninitiated, the NWO globalists have been waging this type of weather warfare across the planet for several decades.  Their primary target in 2020, however, is the United States of America.  Hence, the American people can expect more superstorms lashing at strategic electoral locations around the prime battleground state of Florida, as well as the pivotal swing state of Texas.

The globalist perpetrators are exceedingly desperate to rig this election by any means possible even if it means destroying an entire state as they are doing to California, America’s new Charcoal State.  See: OPERATION TORCH CALIFORNIA: NWO Pyro-terrorists Geoengineering Massive Firestorms, Triggering Wildfires with DEWs

KEY POINTS: Many folks wonder why the cabal would literally burn down a whole state, especially one that’s so compliant in carrying out the New World Order agenda.  The Hollywood celebrity society is basically being coerced to zealously promote the climate change narrative on pain of having their gated communities torched.  Similarly, the Sultans of Silicon Valley are being relentlessly terrorized to implement every single violation of free speech necessary in order to shut down the Right to ensure a Biden victory. (See: Apocalyptic Orange Sky Over San Francisco Foreshadows the Doomed Future of Silicon Valley)  Even the former CA globalist governor Jerry Brown is putting out a unusually dark and gloomy message: Former CA Governor Jerry Brown is finally receiving his comeuppance.

At the end of the day, it’s the expeditious implementation of the UN agendas that reign supreme across America.  These directly concern the leadership of the Deep State, the Democrat Party and the NWO globalists, who are all colluding to collapse the American Republic.  The successful completion of both Agenda 21 and 2030 Agenda for Sustainable Development in all 50 states is critical toward the ultimate goal of establishing a One World Government.

Back to Sally and the geoengineered Pensacola deluge of 2020

As of today — Thursday morning, September 17th — 99% of the greater Pensacola metro area is without power.  Isn’t this how they always do it—disempower the populace by shutting down their power?!  What better way to prevent countless conservative voters from casting their ballots?  They can’t even clean up the mess without the power grid and/or infrastructure down.

Not only was Escambia County deliberately submerged by Sally’s record downpours, all of the counties north and east were inundated with flood waters.   Pensacola itself was literally built on a massive swamp and complex network of bayous, so submersing it via an immense frankenstorm is not very difficult.  But it’s also all the other RED counties to the east of Escambia that were also catastrophically flooded, as that is where hurricanes always produce the most rainfall.  The weather geo-terrorists know this pattern well, which is why both Sally and Ivan were aimed at Gulf Shores, Alabama, right across the state line.  In this fashion, they were assured of a cataclysmic outcome for much of the Florida Panhandle.

Now let’s take a close look at the path of Hurricane Sally below. 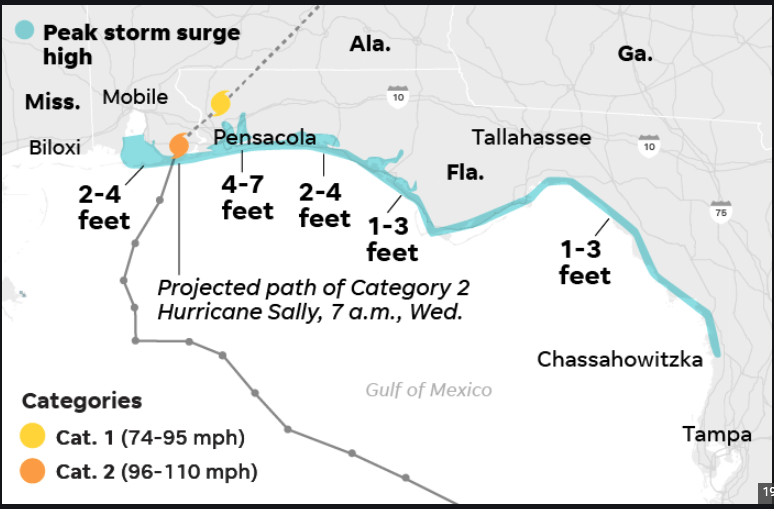 Are we supposed to believe that Sally decided to take a sharp right turn on September 15th and headed right for Gulf Shores?!

Really, when all the best weather forecasts– over several days — showed a trajectory heading right for Louisiana (actually west of NOLA), then the superstorm mysteriously takes a hard right toward Florida’s perennial ground zero, what are the rational explanations.  This highly deceitful tactic of intentionally disseminating fake weather forecasts has been used for many years unknown to most folks.

Not only are the true hurricane paths purposefully misrepresented by the major weather-tracking services, and then misrepresented by the MSM meteorologist, the intensities of the storms are deliberately downplayed until the hurricanes get closer to shore when its way too late for the residents to evacuate.  Thousands of people were killed this way in Florida and Georgia during and in the aftermath of the calamitous Cat. 5 superstorm—Hurricane Michael.  That one also wiped out Tyndall Air Force Base which took a direct hit by purposeful design … … … just as the Pensacola Naval Air Station often takes a direct hit.

Again, take a real close look at Hurricane Sally’s trajectory all the way from the southern tip of Florida.  The only way a hurricane would veer right so abruptly (notice the perfect right angle that occurred on Tuesday at 2:00 AM) is by being carefully steered by the geoengineers who then grew the superstorm into Cat. 2 hurricane. 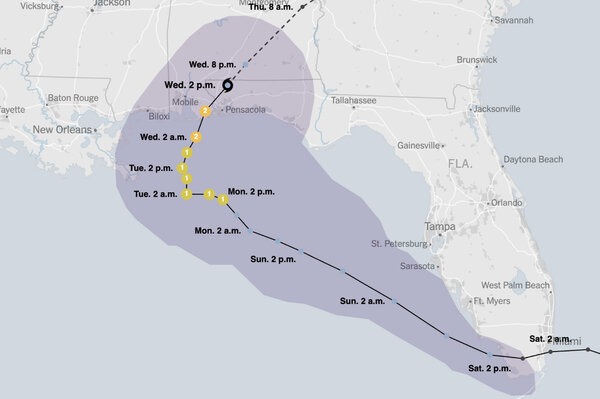 While a Cat. 2 may not seem to be that dangerous, a large slow-moving rain-dumper like Sally can inflict as much damage with flooding than one with extremely high winds.  In this case, the destructive storm surge tore up the coastline from Alabama all across the Florida north shore.

Just how serious was the damage, most of which has not even been surveyed yet? 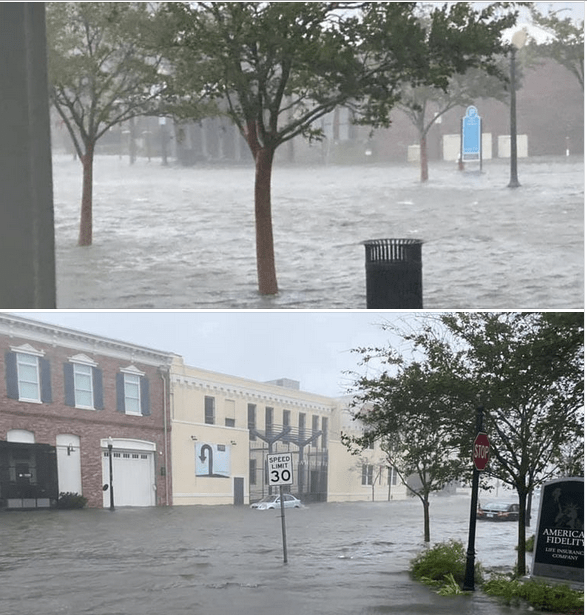 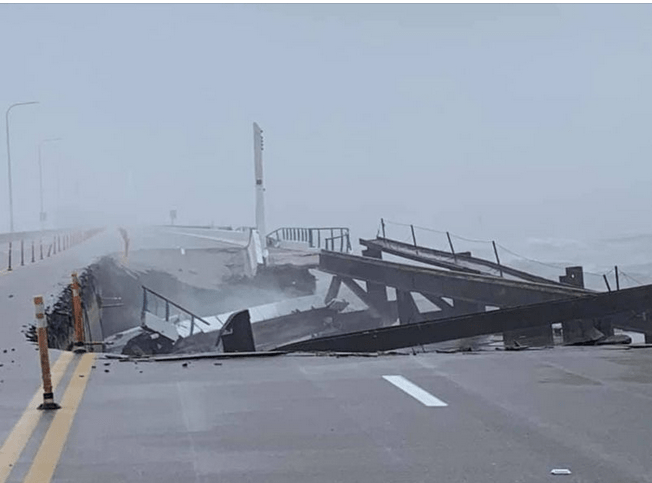 As always, it is the overflowing rivers in the aftermath of these HUGE rain-dumpers that can add insult to the injury.

First, here is a map of the major rivers that flow through North Florida:

Next, we see the trajectory of Hurricane Sally from the point of landfall. 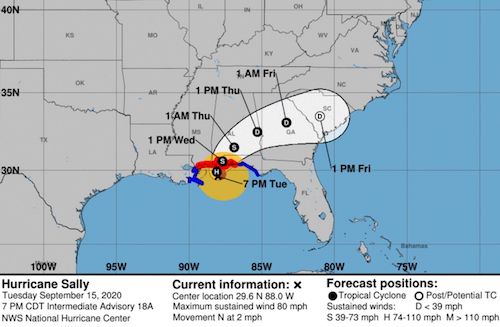 The obvious plan of the geoengineers was to continue to feed the swollen rivers throughout the Deep South so that by time the storm waters reached Florida, they would overflow their banks.

This is a very crafty and common tactic used by the weather warriors used to bring more damage and disruption to some of the same areas ravaged by Sally. See: Even though Sally has left the area, North Florida is still under major flood watch from cresting rivers.

Isn’t it also deceptive of the perps that they with great calculation name some of the worst storms with names like “Sally”?  This artifice serves to create a false sense of safety especially for those who should be on top of every aspect of such a dangerous superstorm.

For example, during the 2005 Gulf of Mexico tropical cyclone season, the geoengineers named the 3 worst storms Katrina, Wilma and Rita.  Hurricane Katrina went on to cause upwards of $125 billion of damage and a grossly under-reported 1800 deaths.

KEY POINT: What the state of Florida just experienced was nothing short of a SURPRISE ATTACK—a paralyzing assault on both the city and citizens.  The city of Pensacola and surrounding Ecambia County is as conservative and Christian as any metropolitan area in America.  This community of Patriots was outright attacked as the globalists have done to it several times in the past. See: Hurricane Sally shocks Pensacola area with surprising strength, heavy wind and floods

It’s quite suspicious, isn’t it, that Hurricane Sally struck Florida precisely 16 years after the cataclysmic Hurricane Ivan, both making landfall on September 16th.  Both superstorms were also manufactured and scheduled for maximum impact to strike the coastline in the early morning hours catching many unaware residents by surprise. (Sally hit land at 4:45 AM CT and Ivan struck at 3:00 AM CT.)

This is what frequently happens when a hurricane is forecasted for days to be heading toward Louisiana or Texas; then it’s suddenly shifted toward its intended target catching people throughout the strike zone totally off guard.  The same thing happened with Hurricane Michael costing many folks their lives and livelihoods as most were uncharacteristically unprepared.

The malevolent perps behind this unrelenting and “withering weather warfare waged” against the American Republic will not stop until they have accomplished their nefarious goals.  Therefore, the only way out of this rapidly deteriorating predicament is to share this exposé with everyone and anyone.  When good folks come to understand that they are being continually victimized in this manner, surely they will rise up to terminate those who attack them with technologically advanced weaponry that’s as devastating as nuclear bombs.

Remember, this Hurricane Sally weather bomb was a highly sophisticated false flag attack on the American people just like Hurricane Harvey was and the ongoing California firestorms are today.  These are in fact very stealthy false flag operations blamed on Mother Nature, although most of them are first created by the geoengineers if they’re not hijacked. Then they are meticulously manipulated and aimed at a selected geopolitical target to have an overwhelming “shock and awe” effect.

The Patriot Movement must put a stop to this weather warfare post-haste before much of the body politic has been paralyzed and is unable to act.  Only when the citizenry correctly comprehends their plight can they respond appropriately … and before it’s too late!

This Alt Media platform published various MSM articles, prior to Sally’s landfall, under SOTN titles predicting that Hurricane Sally was specifically geoengineered as weather terrorism to produce the effects that the state is experiencing right now.  As follows: